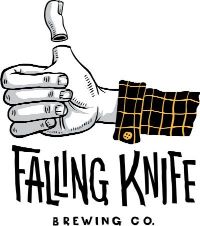 Minneapolis, Minn. | Beer drinkers of the Greater Twin Cities, say hello to your newest Northeast Minneapolis neighbor: Falling Knife Brewing Company. Opening in 2019, Falling Knife will brew adventurous and classic beers that are as distinctive in style as the people and culture that makes up this flourishing and historic neighborhood. These world-class beers will meld with the sounds of a curated jukebox, uniquely-designed taproom and the ambience of friends enjoying one another’s company.

Falling Knife Brewing Co. occupies a 7,400-square-foot space with a 20-barrel brewhouse and 149-person full-service taproom, including a dedicated pinball alley. 16 taps will showcase a wide array of beers produced exclusively on premise, and include a spectrum of styles and flavors that will appeal to a multitude of patrons .

“We didn’t realize it at the time, but this project started with listening to bands we love and drinking beer at venues around the Twin Cities.” said CEO Andy Rutledge. “That bond eventually progressed into serious conversations about starting a brewery together, which is now becoming Falling Knife Brewing Company.”

Rutledge is joined by Tom Berg and Dan Herman, both longtime veterans of the beer and service industries. Berg was a nationally decorated homebrewer and BJCP beer judge who brewed commercially at Wicked Wort and has collaborated at several other Twin Cities breweries, including Venn Brewing Company, Back Channel Brewing, Flat Earth Brewing and Day Block Brewing. Herman has nearly 20 years of hospitality experience and is acknowledged for his accomplishments at service-focused restaurants like Kincaids and Tilia.

“Time is the most valuable commodity people can give. When someone trusts us with the free time they have, we will respond with outstanding beer and a phenomenal experience,” said Herman.

The taproom will provide a sense of familiarity, but Falling Knife intends to redefine consumer’s expectations about modern taprooms. Table service will allow guests to relax and casually explore the flavors Falling Knife has to offer. On any given day, the taproom may host a game night, pinball tournaments, private parties, specialty beer releases, and friends conversing at the bar over a pint of Falling Knife’s finest.

About Falling Knife Brewing Co.
Falling Knife Brewing Company is a craft brewery in Northeast Minneapolis dedicated to providing world-class beers and service to our guests, value to our partners, and purpose to our co-workers. The brewery taproom at 783 Harding St NE serves a wide variety of beer styles from 16 taps in a unique and relaxing space.