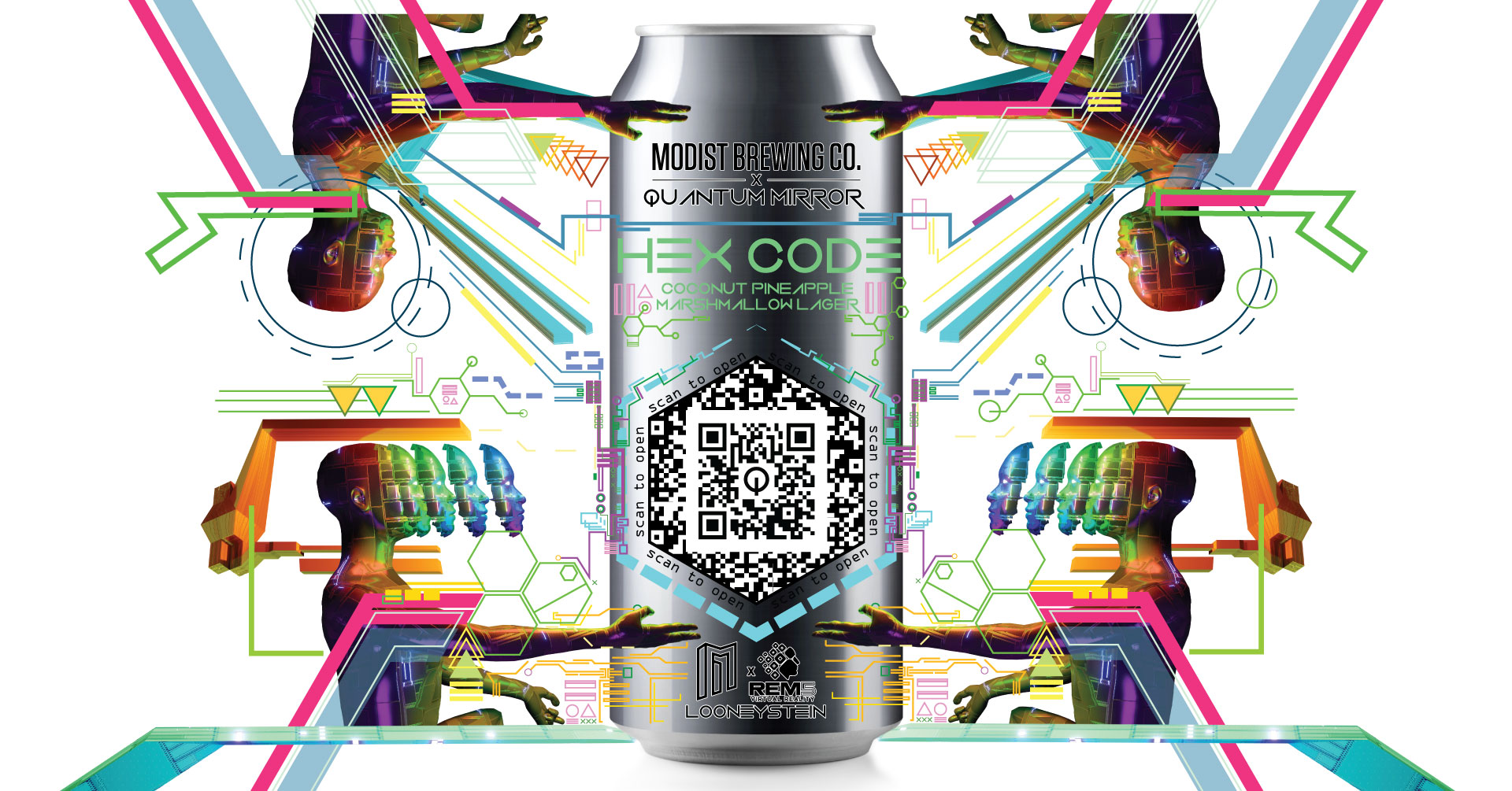 NORTH LOOP, MINNEAPOLIS, OCTOBER 25, 2021 — After months of development, Modist Brewing Co. and REM5 VR Lab are proud to announce Minnesota’s first craft beer that integrates Augmented Reality (AR) and non-fungible tokens (NFTs). Hex Code, a Pineapple Coconut Marshmallow Lager, will be the first craft beer in Minnesota—and among the first in the world—to include AR integrations while boasting a unique NFT that will be raffled off via a QR code on the label. All of this to build upon the excitement of the world-renowned Quantum Mirror art installation opening at REM5.

After the success of the first Modist and REM5 collaboration, HAPTIC, an IPA that featured a beer label designed in virtual reality, they’ve teamed up again to continue to push the limits of craft beer and technology. “We love working with REM5, and relish the opportunity to augment reality and finally make tokens that are non-fungible.” said Daniel Paul Wellendorf, Modist’s Co-Owner and Head of Marketing.

“To create this beer, we wanted the liquid inside the can to match the crazy experience that the Quantum Mirror provides,” explained Keigan Knee, Modist Co-Owner and Director of Product Development. In the spirit of pushing the boundaries of what beer can be, Hex Code was brewed with Premium Pilsner malt, milk sugar, marshmallows, pineapple, toasted coconut, and Madagascar vanilla beans. It was designed to send taste buds on a journey that they may have never been on before.

Cans of Hex Code will have QR codes that you can scan to experience the AR technology, find more information about Quantum Mirror, and enter a raffle run by REM5 to celebrate the opening of the art installation. The grand prize is a one-of-a-kind NFT created by Quantum Mirror artist Adrian Stein. Don’t understand NFTs? At a very high level, it is a form of cryptocurrency; a new technology that has exploded in the digital art world. Other raffle prizes include tickets to the installation, tours of Modist Brewing, and other surprises leading up to the opening of Quantum Mirror.

Hex Code will be released at Modist’s North Loop Minneapolis taproom on Saturday, October 30th, and will begin to make its way to liquor stores on Tuesday, November 2, including locations in Minnesota, Denmark, Ohio, the New England area, Wisconsin, and Iowa. The Quantum Mirror art installation opens to the public at REM5’s studio space in St. Louis Park on Thursday, November 18th.

Quantum Mirror is a transcendent immersive art experience created by Adrian Stein and located at REM5 VR Laboratory. Here you can explore an interactive journey of futuristic XR installations that reflect on the blurred line between humans and technology. This is a timed, ticketed experience for up to six trailblazers to enjoy and get up close and personal with the art including the epic, over 180 mirror infinity room that is illuminated by video art from three, 75 inch screens.

Modist opened in the North Loop neighborhood of Minneapolis in April of 2016 aiming to modify beer and how it is perceived by defying rules and expectations. Utilizing a mash filter powered brewing system, they push past traditional brewing by embracing creativity and unconstrained experimentation. Modist showcases their innovative spirit via the creation of a series of never seen before beers, including their flagship brews: Dreamyard (hazy ipa made from entirely oats and wheat sans barley), False Pattern (hazy pale ale brewed from oats), and First Call (an oat based coffee lager that’s blonde in color).

In their first year of business, Modist was named both the Best New Brewery in Minnesota by Growler Magazine as well as one of “The 50 Best Breweries in the United States” by BeerAdvocate. In the time since opening, they’ve received continuous accolades including recently being named Minnesota’s Most Innovative Brewery, as well as a multitude of individual beer awards.

REM5 is a vertically integrated, immersive technology company based in Minneapolis: REM5 VR Laboratory, an 8,000 sq. ft. VR event space; REM5 For Good, a global leader in XR for impact and social change; and REM5 STUDIOS, a full-service, XR agency. Through these three pillars, REM5 delivers world-class XR experiences to tens of thousands of people each year.